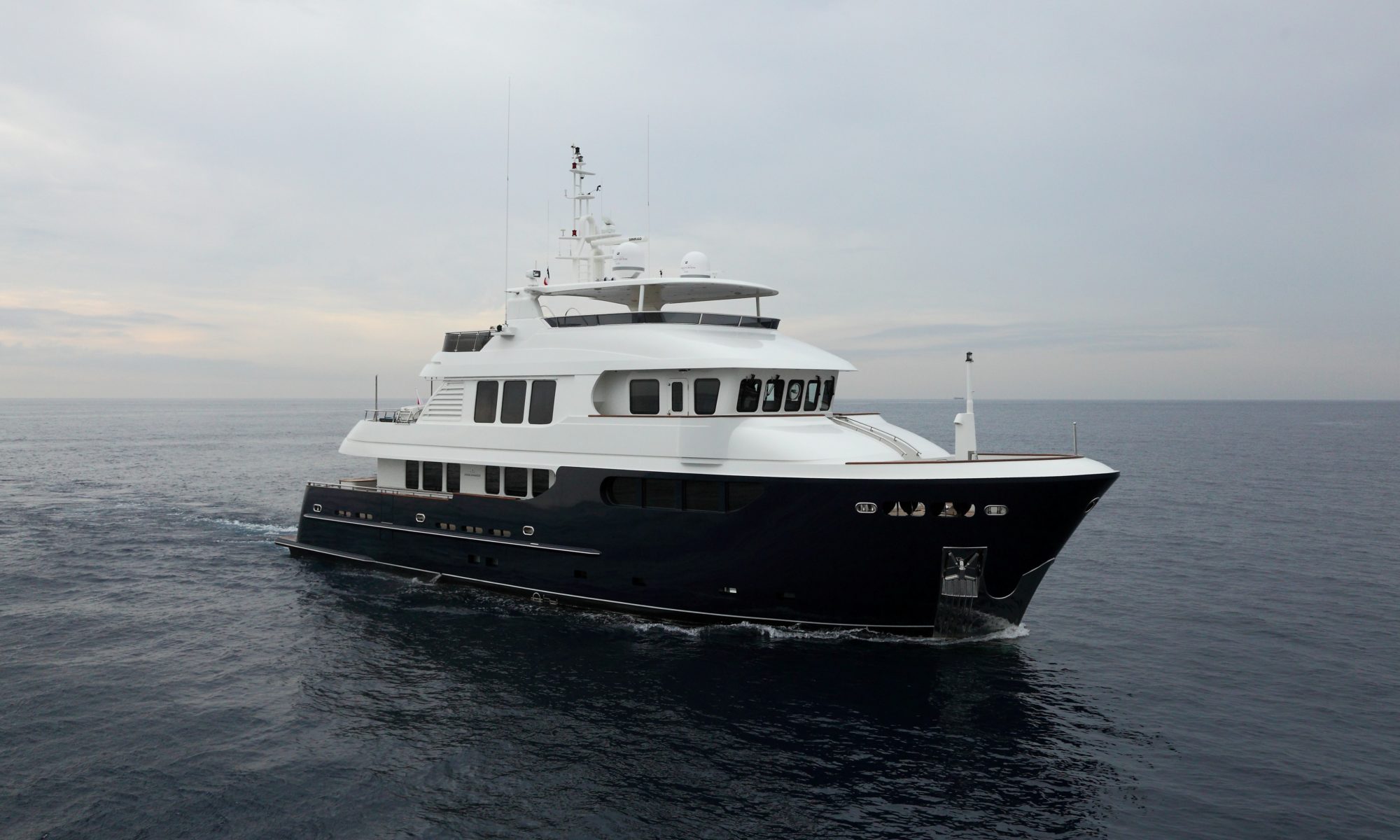 Early last year I was contacted by a client who wanted to buy a 30-meter yacht – displacement or semi displacement, because he did not want to go fast. Preferably with five staterooms and the Garage for the tender was a ‘must have’. So, our journey began; he was staggered at the interior volumes of some semi-displacement yachts – we found a 28 meter with five staterooms a large salon and a garage for a 4-meter RIB. When we saw the full displacement yacht next to it with similar dimensions, it clearly had less volume. Typically, on the full displacement yacht of that size (sub 30m) the tender is carried on deck, usually it has a four-stateroom layout and in most cases, it is built of steel. So why the difference in volume? Even the manufacturers themselves and learned colleagues could not give us the explanation that we were satisfied with. They said that it was the build process, when constructing a yacht using GRP which made the difference; the accommodation deck could sit lower in the hull because of the construction parameters of the two materials; it made sense, but the answers were not convincing enough for me. Why was there such a significant difference? The answer when I heard it was kind of obvious, and the Naval Architect from Laurent Giles did well to hide his contempt for the naivety of the question when I asked him, but because it had taken me so long to find the answer, I wanted to share my findings, or rather his findings.

We were looking at the current crop of semi-displacement Navetta type yachts from the likes of Custom Line or Numarine which are light compared to their steel full displacement cousins, in broad terms this can be as much as 50%. Some of them though squeeze a considerable amount of accommodation plus a decent sized garage into a relatively short and high vessel. In order to get so much accommodation, the hulls have a hard chine which effectively broadens the hull at and below the waterline; this allows the accommodation deck to be nearly the same width as the main deck. This also provides lift when approaching and maintaining higher cruising speeds. In rough seas though the buoyancy of these chines and their high resistance to the passing water makes the boat pitch from side to side much more than that a round chine; much the same can be said for a planing hull of course. Stabilisers can help to a point, but they are a lot less effective on a semi-displacement or planing hull than on a round bilge yacht. There is so little difference between the cruising speeds typically 10 knots and 13 knots that the buying criteria in my mind ought to be focused more on the amount of accommodation which is in general substantially more in a semi-displacement yacht. The owner’s desire to navigate in rough seas also needs to be considered. On sea trials in one of the Navetta series yachts there was considerable rolling and pitching; even with the fin stabilisers switched on. This was not the little ship my client was wanting to buy.

So, naturally, I would never offer one of my clients a Custom Line Navetta, right? I most certainly would. Custom Line have built 200 of them so far. The designs by Studio Zuccon have been meticulously developed over the series and during 20 years. The amount of accommodation afforded by the clever design is enviable. The client in question chose a displacement yacht; it did not have the amount of accommodation he was looking for, nor was the garage substantial enough to have what he considered to be an adequately sized tender, so, he bought a 10-meter Chase Boat as well which he tows on longer passages. A production Motor Yacht coming from Custom Line means that you get pretty good value and good resale if priced appropriately.

Depending upon the budget – there is plenty of good pre-owned yachts also worthy of consideration, built in GRP or in Steel. There are some great offerings from Taiwanese builders who have an established tradition of building these types of yacht and new kids on the block such as HAWK who will be building their yachts in Turkey, who have some pedigree projects from 48 to 100 meters. The 48 Meter will be 650 GT, more of that another time……these are exciting times in the yacht industry.

Contact me if you would like details of my Top Ten Explorer Style Yachts available on the market today.